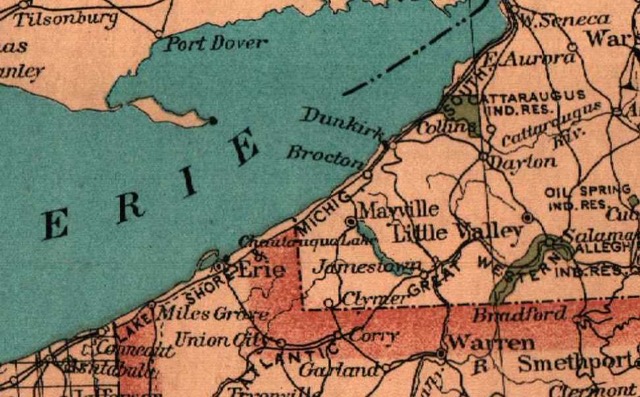 This is the first of two articles discussing Map 27, the United States of America and its territories in 1891. Figure 1 is the title of the map and, although the map contains much beyond the boundaries of the United States, both articles will be constrained to our Country. This first part covers what determined the internal surveys visible on this map in the eastern states.

Figure 2 is interesting insofar as it visually demonstrates differences in how states were surveyed. The first 16 states (the original 13 Colonies, plus Vermont, Kentucky, and Tennessee, each admitted in the 1790’s) lack the dense grid of the Public Land Survey System (“PLSS”) imposed on most 19th Century states. (Discussion of the history of this system is beyond the scope of this article. For more detail visit: https://en.wikipedia.org/wiki/Public_Land_Survey_System)

Perhaps the most interesting and educational aspect of the map is the inclusion of historically significant “Military Lands” and Reserves in Ohio. All were defunct before 1891 when the map was printed, but this is a wonderful example of how a map can reflect history. In early United States history, what is now the state of Ohio was referred to as the Western Reserve, not being admitted to the Union until 1803. (The “officially approved” date of statehood was established by a joint Congressional resolution in 1953… but that’s another story). Prior to Statehood there were multiple claims on the land that eventually became Ohio.

Inspect Figure 3, the state of Ohio. Within Ohio’s boundaries you will see:

What are these areas? The first two, reserving more than 2.5 million and 4.2 million acres, respectively, set aside land in the “Ohio Country” as compensation – in lieu of cash – to Revolutionary War veterans for their service. The Connecticut Reserve comprised land preserved by that state, once claimed as part of its Western extent, and retained when the remaining Connecticut Western Claims were ceded following the American Revolution, and sold to speculators of the Connecticut Land Company. Similarly, the “Ohio Company of Associates” was established in Boston with an aim to settling land adjacent to the Ohio River. Through two separate purchases, and a donation from the National Government, the Company accrued almost 1.25 million acres. The many claims on the “Ohio Country” resulted in multiple surveys, each with a different base line, including the Miami, Muskingum, Ohio, and Scioto Rivers. This fact suggests how challenging it is to survey properties in these states even today!

Also created in the early days of the Republic was the Cattaraugus Reservation (Figure 4). Set aside for Seneca Nation – the largest of the Six Nations comprising the Iroquois Confederacy – in 1797 in western New York. As seen on the map, this is a small area of just over 22,000 acres, but the Nation is the fifth largest employer in western New York.

Next month will include a portion of Map 27 which, at the time of printing, was “Indian Territory” – present day Oklahoma – and discuss the historical basis for the surveys of several  of the western states.